While the House select committee carefully lays out a timeline of the Jan. 6, 2021, attack on the U.S. Capitol and the events that led to it, false claims of a stolen election are still spreading.

Now, a new strategy has emerged. Instead of trickling down from former President Donald Trump's Twitter account, the movement has gone grassroots, with election denial influencers traveling the country to share their conspiracy theories with politicians and voters.

Misinformation has continued to spread widely after the Capitol insurrection

Over the course of the 18 months since Jan. 6, 2021, the four election denialists NPR tracked have been slated to speak at at least 308 events in 45 states and the District of Columbia. The events were often small, held in restaurants and churches, backyards and community centers.

While efforts to undermine election results have been particularly public in battleground states like Arizona, the grassroots election denial movement is happening all over the country, including in deep red and blue states. On the social media site Telegram, believers have formed "Audit Chats" by state, including in places like New York and California, to talk about election conspiracy theories.

Election denialism has made influencers of those promoting it

Lindell was famous for his pillow commercials before he became a vocal supporter of Trump. However, the other three election deniers NPR tracked were not as well known prior to their embrace of election fraud conspiracy theories.

In March of 2021, Frank posted to his social media about spending days of his "personal time" with Lindell. Later, he also appeared in a video on Lindell's website to talk about his theories. Eventually, Frank left his job as a teacher in Ohio and now travels full time and talks about his theories of election fraud, which have been widely debunked. He appeared at at least 137 events over the past 18 months.

Keshel was already making claims of widespread election fraud in August of 2021 when Trump highlighted him in a statement. That helped propel Keshel to prominence. He has now appeared at at least 121 events across 36 states.

Clements was a law professor at New Mexico State University until he was fired over his failure to comply with the school's COVID-19 policies. Clements has appeared at fewer events — 62 since Jan. 6, 2021, but he maintains a robust social media presence. On Telegram, his account has over 115,000 subscribers.

The movement has clear goals

The 2020 election is a settled question, and a variety of courts, audits, and news reports have repeatedly disproved claims of fraud. For that reason, one goal of the election denial movement, to "decertify" or overturn the 2020 vote, won't come to fruition.

Frank calls his vision for American elections "Vote Amish," referencing a skepticism for voting machines and electronic poll books. Keshel lays out a more complicated "10 Points to True Election Integrity." Both look for a future in which votes are cast in one day, in person, on paper, and counted by hand. Voting experts however have found that counting in that way would actually greatly increase the amount of errors in the tabulating process and sow chaos in the process.

Republicans in Pennsylvania and Arizona have already attempted to ban or severely restrict the use of ballot dropboxes. Bills in other states have made a variety of election restrictions, including stricter ID requirements and limits on the window for mail-in voting.

There is no evidence of widespread fraud in U.S. elections to begin with. So all told, these restrictions would have the primary effect of making it much harder for many Americans to vote.

These four election deniers travel the country to convince everyday Americans the 2020 election was stolen. It's a claim that stokes anger and fear for the people who believe it.

Some people who attend these events have taken action based on the information they heard. That action can take the form of canvassing a neighborhood to look for voter fraud, speaking at a county commission meeting – or harassing election officials.

Jocelyn Benson is Michigan's secretary of state. She told NPR that whenever a prominent figure in the election denial movement visits the state and attacks the election system there, her office adds additional security in anticipation of an uptick in threats.

Carly Koppes, a Republican election official in Weld County, Colo., says it's almost impossible to change the mind of people who go down the rabbit hole of election conspiracies. People in Weld County were going door to door last year seeking to root out fraud, after Douglas Frank visited Colorado.

Allison Mollenkamp
Allison Mollenkamp (she/her) is a fellow with NPR's Investigations Unit, where she's worked to cover election denial and the fallout from the Jan. 6, 2021, attack on the Capitol. You may have previously heard her on Nebraska Public Radio, where she led national Murrow Award-winning coverage of the state's 2019 floods. Mollenkamp holds a master's in journalism from the University of Maryland and a bachelor of arts in English from the University of Alabama. 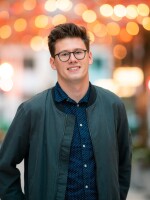 Nick McMillan
Nick McMillan is a fellow with NPR's Investigations Unit. He utilizes data driven techniques, video and motion graphics to tell stories. Previously, McMillan worked at Newsy on investigative documentaries where he contributed to stories uncovering white supremacists in the U.S. military and the aftermath of Hurricane Maria on Puerto Rican school children. McMillan has a bachelor's in Statistics from Rice University and a master's in Journalism from the University of Maryland.
North Coast Conversations
North Coast Conversations is a weekly segment where we meet with local community members developing ways to improve the quality of life on the north coast.
Submit Your Event