Lightning could spark more California fires as the world warms

Wildland firefighters don’t admit to fearing much, but lightning is one terror that even the most experienced veterans say they hope to never encounter.

The worry is not being struck by a bolt, although it can be deadly. Instead, their primary concern is that lightning, slashing down in remote areas, can trigger unseen fires that smolder for days before they flare up, bursting into a dangerous and difficult-to-fight wildfire.

In August 2020, a remarkable barrage of lightning in Central and Northern California spawned more than 15,000 strikes over a few days, igniting more than 600 fires and burning more than 2 million acres. Five simultaneous lightning-sparked fires destroyed thousands of homes and buildings and claimed the lives of at least seven people.

And this month, lightning ignited a nasty, uncontained fire that is still menacing groves of ancient sequoia trees in Sequoia-Kings National Park.

It’s starting to look like a preview of the future: As climate change continues to alter the landscape, particularly in the West, scientists warn that lightning strikes capable of igniting wildfires are expected to multiply.

One study predicts that lightning strikes nationwide will increase 12% for every degree Celsius of global warming and about 50% over the 21st century if people keep emitting planet-warming greenhouse gases at the current pace. Other studies over the past three decades have predicted similar effects of climate change.

“The evidence from looking at climate models is that we can expect that lightning will increase,” said David Romps, who directs the Berkeley Atmospheric Sciences Center and co-authored the study. “My best guess is that by the end of the century — if we continue to burn coal and fossil fuels — we anticipate an increase of the number of lightning strikes by 50%.”

One study predicts that lightning strikes nationwide will increase 12% for every degree Celsius of global warming.

Lightning plays an outsized role in wildfires: More than 40% of wildfires in the West, largely in places other than California, were caused by lightning, and those fires accounted for more than 70% of the acreage burned between 1992 and 2015, according to the U.S. Forest Service.

“Lightning is so dangerous, usually it stays pretty much on the east side of the state, but last year it was all over the place, including the Coast Range,” said David Carle, whose book, Introduction to Fire in California, is a primer on the subject. “I think we have learned that dry lightning storms are a real problem.”

The strangeness of last year’s lightning-sparked fires — striking in coastal ranges unaccustomed to electrical storms — was underscored by the absence of rain, meaning that powerful natural energy hit the ground precisely where overgrown, dry vegetation waited, with no rain to quench the sparks.

There’s little debate that climate change is driving larger and more frequent fires. But so far, scientists have not yet seen an increase in lightning events.

“I’ve looked at lightning trends over the last 25 years, and there hasn’t been a noticeable increase in global lightning or U.S. lightning,”said Chris Vagasky, a meteorologist who monitors lightning for Vaisala, a Finnish company that operates a vast U.S. network of lightning sensors, providing research and real-time data to governmental agencies and private companies.

Because lightning is caused by hyper-local, highly transitory factors, such as winds, it’s difficult for scientists to tease out patterns or project the future. “Lightning itself is such a small process that it can’t be modeled explicitly at climate scales,” Vagasky said.

Lightning is created by static electricity in clouds, as ice droplets bump into each other and cause friction, heating the air in the cloud to as high as 54,000 degrees. About 80% of the time, lightning explodes from cloud to cloud, crackling and snapping in the upper atmosphere in thunderclouds that can rise 10 miles.

Last year, some 170 million lightning strikes occurred across the country, about 22% below average; California was 51% below average with 283,000 strikes, despite the deadly August 2020 surge. This year, nationwide strikes are trending about 15-20% below average, Vagasky said.

California does not rank among the top ten for lightning strikes: Texas, Florida and Oklahoma, where warm, moist air spends the summer, are the leaders. While lightning can set grass fires in those states, the repercussions are nothing like California’s expansive, destructive and deadly wildfires.

Still, the Golden State has a history of catastrophic fires sparked by lightning storms. In the Siege of ’87, lightning assaulted the California-Oregon border for two weeks, setting off as many as 4,000 fires. Lightning-sparked fires in 1999 also merged in Big Sur into a massive conflagration, and more than 5,000 strikes over a day and a half set off about 1,000 fires in 2008.

While less lightning in California over the past two years is good news for fire commanders, the scientists’ projections of an increase in coming decades are sobering: This year’s stubborn drought and record heat mean that lightning strikes are particularly dangerous.

“There are some lightning strikes in these conditions where you have immediate fire activity,” said Anthony Scardina, deputy regional forester for the U.S. Forest Service. “In other instances, the strike may not show a flame for 72 hours. It could hit a single tree, and in the right environment, it could flame up later and grow. The fire is out there, hiding.”

Lightning “could hit a single tree, and in the right environment, it could flame up later and grow. The fire is out there, hiding.”

Such blazes are known as “holdover fires,” said Robyn Heffernan, a federal meteorologist working at the National Interagency Fire Center in Boise, Idaho, the nerve center for U.S. wildland firefighting. “When there are thunderstorms and lightning events, we know that these small fires can be out there and we look for them.”

Another complicating issue with lightning-caused fires is the unpredictability of their location. Lightning can strike as far as 20 miles away from the thunderstorm that generated them. Human-caused fires, which account for about 95% of wildfires in California, tend to start near people or equipment, generally within reasonable reach of fire crews. But lightning’s caprice means fires can pop up virtually anywhere, in the backcountry or far from firefighters.

“I’ve been working in California my entire career and our weather models really struggle to keep up with predicting these events,” he said.

Understanding weather patterns and lightning risk is a critical piece of fire strategy, so much so that large blazes are assigned fire weather officers who receive special training and certification from the National Weather Service.

This month’s lightning storms in the Bay Area and Southern California lasted less than 12 hours, compared to two days of strikes that triggered the August 2020 fire siege. That siege caught authorities off guard for an array of reasons: the number of strikes, the speed at which the fires spread and converged, and how broadly dispersed the lightning storms were.

The five major lightning-sparked fires all ignited within three days, beginning on Aug. 16, reaching from Monterey Bay north to the Oregon border. In the end, lightning storms had spawned California’s first “gigafire,” a single blaze that grew to more than a million acres.

One of the biggest fires — the CZU August Complex fire north of Santa Cruz — was sparked by lightning around 3 a.m on a Sunday, on Aug. 16. By noon, 22 fires were detected, 15 of them unstaffed with firefighters.

That same day, lightning sparked the LNU fires, racing through Sonoma, Napa, Lake, Solana and Yolo Counties. Thunderstorms west of Big Sur sparked the SCU Lightning Complex fire that spread over five counties. Then, over the next two days, Butte, Tehama and Glenn Counties were struck with multiple lightning fires that killed one firefighter, and the Sequoia National Forest blew up with a fire that burned nearly 170,000 acres.

Once these multiple fires caught, they moved at a furious rate. Fire authorities had to rush crews from one blaze to another, a deadly and frustrating game of whack-a-mole.

One of the biggest threats, Rhodes said, was where the lightning siege struck: “A lot of the areas were very remote,” he said, “and it was dry lightning, the worst we can get on fires.” 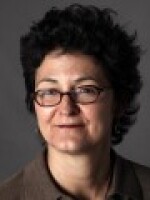 Julie Cart
Julie Cart joined CalMatters as a projects and environment reporter in 2016 after a long career at the Los Angeles Times, where she held many positions: sportswriter, national correspondent and environment reporter. In 2009 she and colleague Bettina Boxall won the Pulitzer Prize for Explanatory Reporting for their series on wildfires in the West.
See stories by Julie Cart